Walter Benjamin goes to Nice in July 1932 and books into the Hotel du Petit Parc. According to Esther Leslie’s Walter Benjamin, from there he writes to Gershom Scholem (26 July 26th) “about future plans, including the four books he intended to write: on the Paris Arcades, collected essays on literature, the selected letters of German humanists and ‘a highly significant book about hashish’ that had to remain a secret” (131). In the later material that constitutes The Arcades Project, Benjamin builds a concatenation of dwelling that commences with the shell, passes though casing, and ends up in hotels and crematoriums within a context that couples the organic with the inorganic, a threshold that he seemed to enjoy transgressing throughout his work:

“The original form of dwelling is existence not in the house but in the shell. The shell bears the impression of its occupant. In the most extreme instance, the dwelling becomes a shell. The nineteenth century, like no other century, was addicted to dwelling. It conceived the residence as a receptacle for the person, and it encased him with all his appurtances so deeply in the dwelling’s interior that one might be reminded of the inside of a compass case, where the instrument with all its accessories lies embedded in deep, usually violet folds of velvet. What didn’t the nineteenth century invent some sort of casing for! Pocket watches, slippers, egg cups, thermometers, playing cards—and in lieu of cases, there were jackets, carpets, wrappers, and covers. The twentieth century, with its porosity and transparency, its tendency toward the well-lit and airy, has put an end to dwelling in the old sense. Set off against the doll house in the residence of the master builder Solness are the ‘homes for human beings.’ Jugendstil unsettled the world of the shell in a radical way. Today this world has disappeared entirely, and dwelling has diminished: for the living, through hotel rooms; for the dead, through crematoriums.” (220-1)

The prevalence of casing in the nineteenth century gives way to the twentieth century’s hotel room and crematorium. Benjamin reads the advent of art nouveau as foregrounding the decline of the insulating “shell” and thus as the decline of dwelling. Hotels emerge here as transitory vessels for the living and the reference to the cremation of corpses stands for more than a memento mori instance in the text, alluding to the human body being reduced to ashes, in other words, divested from the bodily materiality. At least one hotel-room surely meant death to Benjamin; is was the Hotel de Francia at Port-Bou, where he took his own life.

Source: Adorno Archiv at the Institute for Social Research at the Goethe University Frankfurt. Via Wikimedia Commons. 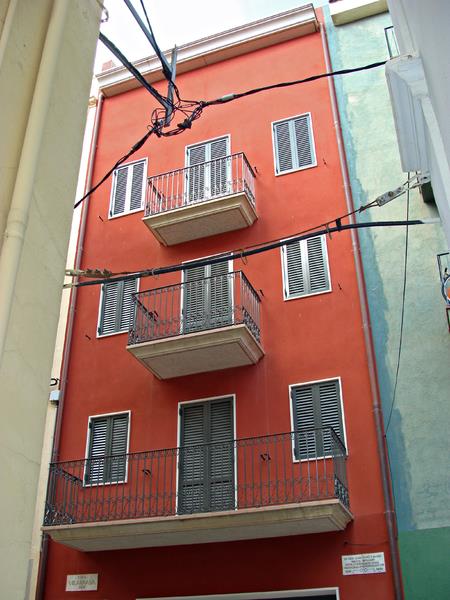