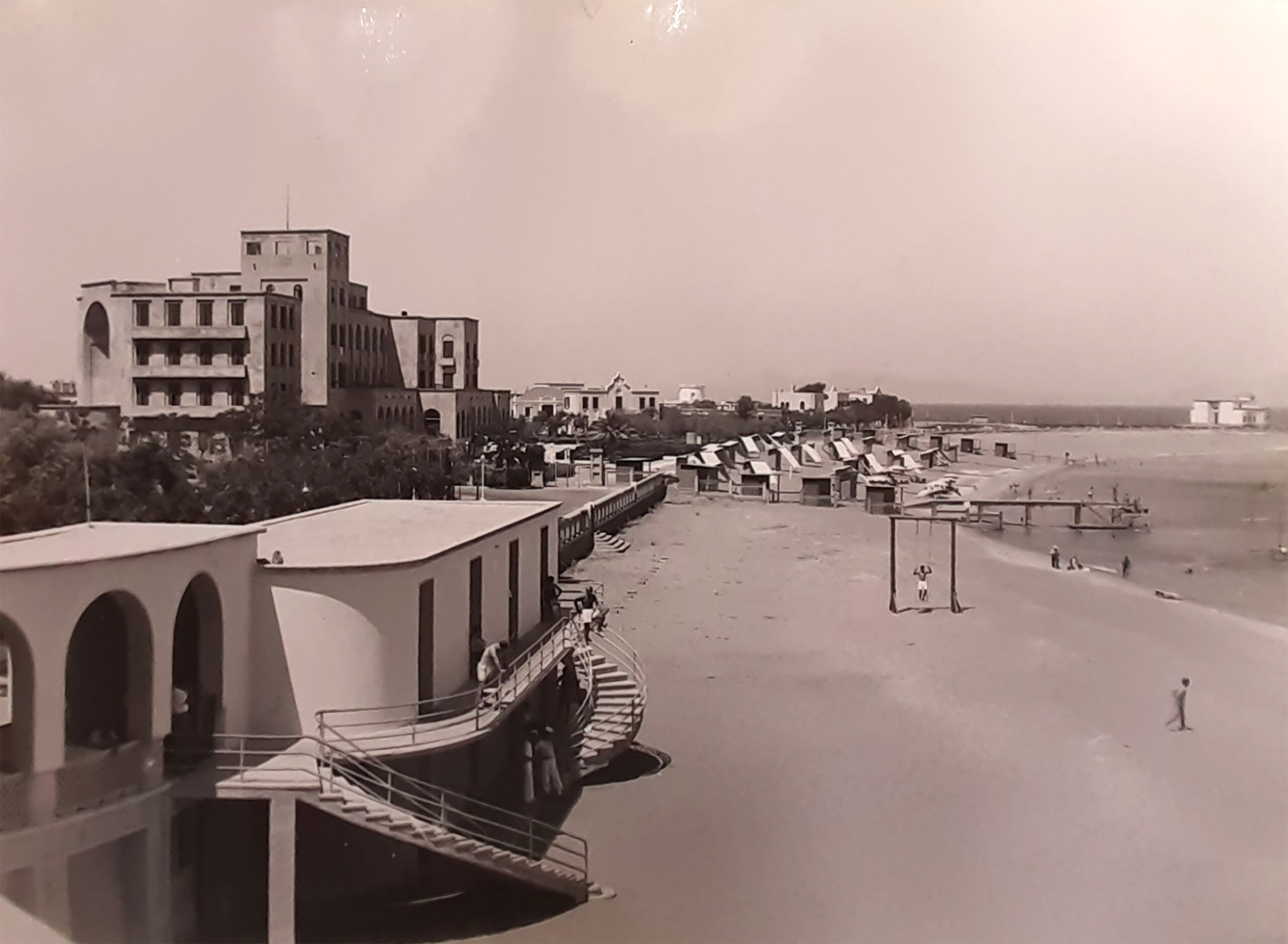 The first chapter of Lawrence Durrell’s Reflections on a Marine Venus: A Companion to the Landscape of Rhodes (1953) presents readers with the author’s first (albeit badly spelt) impressions of the imposing Grande Albergo Delle Rose: “[A]t the end of the long corridor of darkness two tall gates rose up, and behind them the once famous Albergo della Rosa, showing here and there a point of light, weak and diffuse. The steps seemed endless – it was like climbing into the sky …” (Reflections 10). The Frankensteinian edifice—a paradoxical amalgam of Dodecanesian aesthetics and orientalist fascist architecture, as well as a remnant of the precarious, fragile sovereignty of Le Isole Italiane dell’Egeo—was designed by Florestano Di Fausto and Michele Platania and constructed in 1927.

The postwar decadence of the hotel—in perfect tandem with Rhodes’ war-wrecked infrastructure and the overall sense of neglect—is manifested in Durrell’s early observations upon his “late arrival” (Reflections 10). The hotel registry entry date is July 19, 1945. His first impressions call attention to the shattered material reality of the place. Durrell finds himself “vaguely” recalling “the vast entrance hall littered with shed equipment, the buzz of conversation from the dining-hall which served as a mess, the smashed marquetry panels of the lounge” (10). While asserting that “the weariness of that late arrival begins to melt the clear outlines of the detail” (10), Durrell’s mnemonic framing of the hotel premises is exhaustive ranging from descriptions of the “timid Italians who serviced the hotel” (10) to “the long trestle-tables” (11) where a substandard version of continental breakfast is served. Additional references to the desolate “gaunt lounge” marked by the presence of “its foggy mirrors,” a “sleepy maid with a hare-lip,” as well as the surreal presence of Durrell’s fellow-traveller Gideon lying there with “his monocle almost touching the floor” being “rolled out of his eye to the end of its cord” also underline the pervasive sense of nausea and abandonment (11). Having been settled at the Appartamento n. 251—as mentioned in “the pink card that registered his arrival” (Leatham 146)—Durrell soon finds that his hotel life in Rhodes is by no means fulfilling (715). Durrell’s sojourn at the spurious, pseudo-Italianate albergo with its forlorn fantasy of cosmopolitanism rather dismays him. The travelogue addresses the discontents and precariousness of post-war hotel life, which is light years removed from the pervasive Jamesian “sublime hotel–spirit” of high modernism (James 715). The postbellum decadence of the “once fashionable dining-room” of the hotel is not life-affirming, endlessly manifesting itself in its “desolate corridors, chipped marquetry, smashed fittings and marble cornices” (Reflections 11-12).

View of Hotel and Beach from Elli. Courtesy of ELIA/MIET (Hellenic Literary and Historical Archive/Cultural Foundation of the National Bank of Greece).

While facilitating Durrell’s incessant mobility, the albergo remains, for the most part, a shallow and unconvincing setting. His sharply ironic conviction that the dilapidated hotel interior “suggested nothing so much as a carnival which had ended in an earthquake” (12) offers additional corroborating evidence of his contempt for the decrepit hotel space. The reference to “the memory” of the poor “first breakfast (mere bully beef and dry biscuit)” (11) also seems to evoke infecundity. Durrell’s conceptual flight outwards—his escape from the limitations of the Rhodian (literary) hotel—is underscored by the presence of the twofold reference to the exterior within the same clause: “outside the hotel” (11), “outside” (12). Transgressing the spatial limitations of the ruined hotel lobby Durrell seems to point towards the richest, most fulfilling form of existence which, for him at least, cannot be compressed into the world of the hotel. Disenchanted with the artificiality of the edifice, as well as the aesthetically questionable, trite hotel premises, Durrell soon directs attention elsewhere. For him, it is the landscape of Rhodes that seems to invite a more rigorous and fulfilling engagement, one that transcends the limitations of the hotel as a transitory, fleeting, and ephemeral space and celebrates the immanent Spirit of Place of the island.

Durrell, Lawrence. Reflections on a Marine Venus: A Companion to the Landscape of Rhodes. 1953. Faber and Faber, 2000.

—. Spirit of Place: Letters and Essays on Travel. Edited by Alan G. Thomas, Faber and Faber, 1969. 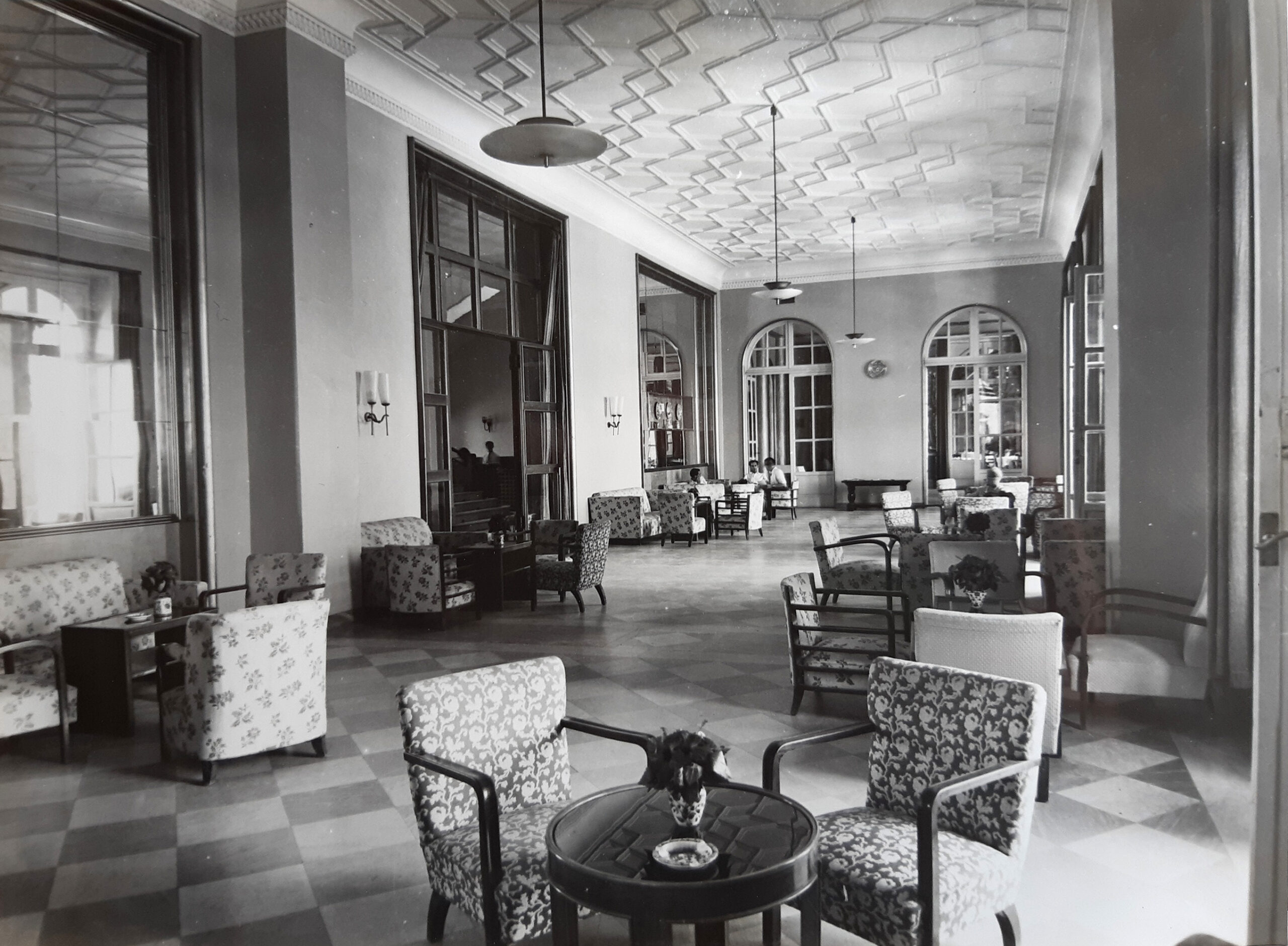 Courtesy of ELIA/MIET (Hellenic Literary and Historical Archive/Cultural Foundation of the National Bank of Greece). 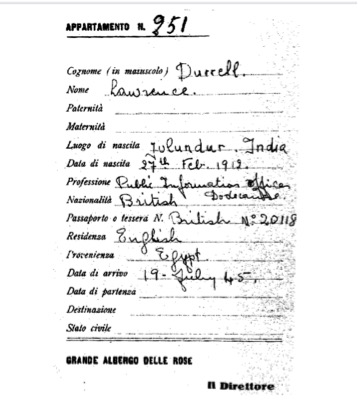