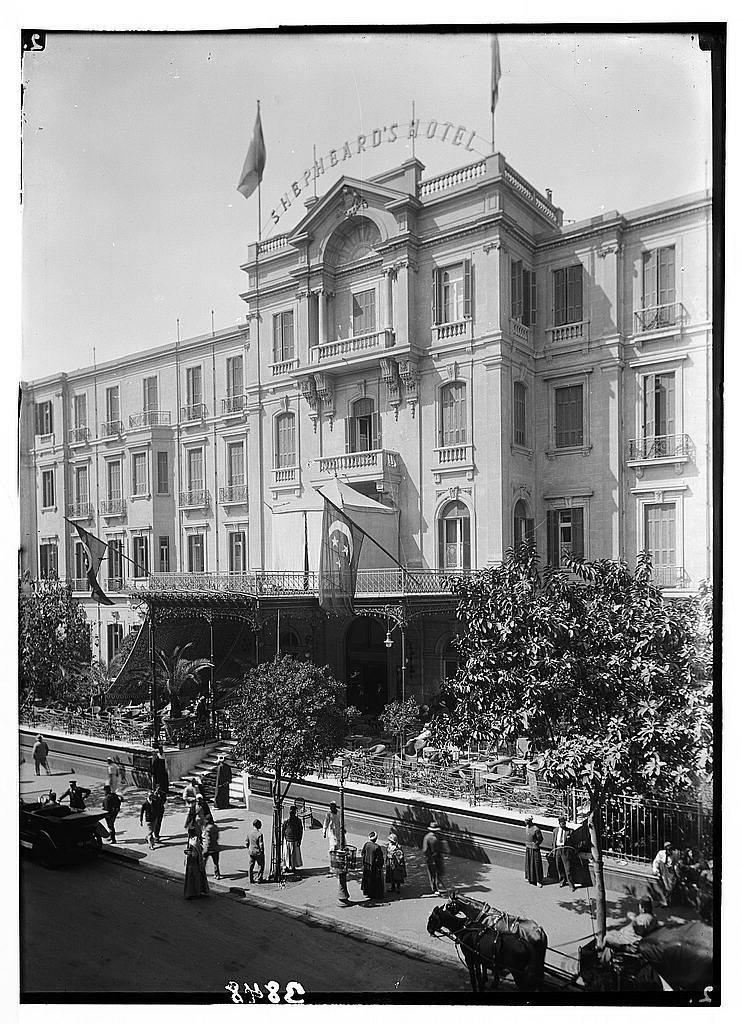 Anthony Trollope and Amelia Edwards at the Cairo Shepheard’s

Colonial hotels like the Cairo Shepheard’s foreground the centrality of grand hotels in the European colonial enterprise. The establishment of this colonial hotel marked the onset of the British rule in the Eastern Mediterranean and registered the rapid expansion of the Empire comprising the colonies, dominions, protectorates, mandates, and other territories it ruled or administered. In Shepheard’s of Cairo: The Birth of the Oriental Grand Hotel, Tarek Ibrahim proposes a reading of the opulent and ostentatious edifice as a sure reflection of the Metropolitan scene asserting that, while its precarious fate is contingent upon the equilibrium of power between colonizers and colonized, it initially reflects the waxing of British influence in Cairo (2019).

In both Anthony Trollope’s short story “An Unprotected Female at the Pyramids” (1859) and Amelia Edwards’ travelogue A Thousand Miles up the Nile (1877), the Cairo grand hotel comes to resemble the form of an imperial order while seeming to crystallize “the ideological nexus between colonial morality and colonial authority” as per Maurizio Peleggi’s analysis of the ambivalent intertwinement of colonizers and colonized within the hotel premises in “The Social and Material Life of Colonial Hotels” (139). The hotel literature on Shepheard’s underlines the paradigmatic status of grand hotels operating in perfect tandem with the British colonial agenda.

Trollope asserts that “the English tongue in Egypt finds its centre at Shepheard’s Hotel” (142) while underscoring the civilizing potential of the Empire through the juxtaposition of the complex rituals of English politeness against the backdrop of the urban chaos of Cairo. Within the hotel lobby, the disarray of the Arab world finally subsides. The colonial hotel decorum dictates stylized interactions, manifestations of agreeable civility, and an excess of pleasantries: “It is here that people congregate who are looking out for parties to visit with them the Upper Nile, and who are generally all smiles and courtesy” (142). Trollope’s late-Victorian veneration of the Shepheard’s as an extension of the imperialist British colonial apparatus is also made manifest in references to its vital role in the ongoing process of colonial expansion: “And then, again, four or five times a month the house is filled with young aspirants going out to India, male and female, full of valour and bloom” (142). The affirming, hegemonic register (“valour,” “bloom”) showcases the importance of Shepheard’s in the established colonial nexus between metropolitan London and India (142). The ever-expanding list of “sojourners at Shepheard’s” (142) consistently apprehends “Cairo the Oriental” (146) through western hermeneutic schemata. The power struggle and rivalry between the prominent colonial powers seems to be perfectly at home within the hotel premises where “M. Delabordeau, a Frenchman, now resident in Cairo,” expresses consternation over the fate of “the canal about to be made between the Mediterranean and the Red Sea” (142). To make matters worse, Mr. Damer ridicules Mr. Delabordeau’s discontent over the fragility of infinite colonial expansion in what reads as a fit of complacent assertion that underscores the existing Franco-British enmity: “the latter gentleman, true to English interests, perpetually declared that the canal would never be made, and thus irritated M. Delabordeau not a little” (143).

Amelia Edwards’ A Thousand Miles up the Nile is also one of the prime pieces of hotel literature that sketch the spatial economy of the colonial hotel and the convergence of the metropolitan center and its periphery within its premises. Like Trollope, Edwards begins the first chapter of her travel narrative within the Cairo Shepheard’s. The cosmopolitan hotel facilitates her effortless passage to Egypt. It feels as if the entire imperial apparatus has been literally transposed from metropolitan London to the complacent hotel as its sure projection: “It is the traveller’s lot to dine at many table-d’hôtes in the course of many wanderings ; but it seldom befalls him to make one of a more miscellaneous gathering than that which overfills the great dining-room at Shepheard’s Hotel in Cairo during the beginning and height of the regular Egyptian season” (Edwards 1). As happens with Trollope’s protagonists eighteen years earlier, the colonial hotel lobby once again accommodates the political, military, and administrative economy of the empire seeming to be permanently oscillating between India and Britain: “Here assemble daily some two to three hundred persons of all ranks, nationalities, and pursuits ; half of whom are Anglo-Indians homeward or outward bound, European residents, or visitors established in Cairo” (Edwards 1). In his discussion of Jan Morris’s assertion in Pax Britannica that “No other hotel was quite so famous [as Shepheard’s]” (295), Peleggi underscores the importance of the Cairo Shepheard’s in postcolonial criticism on account of its being the principal colonial/imperial hotel establishment (Peleggi 125-26: 2012). Edwards neatly summarizes this claiming that appearances do matter “in a place like Shepheard’s, where every fresh arrival has the honour of contributing, for at least a few minutes, to the general entertainment” (2). A December 14, 1942 Time magazine description highlights the prominence of the colonial hotel, even as the inevitable end of the empire is looming: “The well-to-do British officers in Egypt, the ambassadors with letters plenipotentiary, the Americans with fat purses, the glamour girls of the Middle East, […] all stay at just one hotel in Cairo: Shepheard’s” (Luce 1942: 119).

Having epitomized the waxing of British Colonial rule, the Cairo Shepheard’s also ironically signals the progressive decline of the empire. 20th century literature on the colonial hotel seems to apprehend the Shepheard’s differently pointing to the very impermanence of the British Empire itself through the hotel as its most potent signifier. The turbulent life of the emblematic colonial hotel ends on January 26, 1952, during the anti-British protests, when the rioters set Cairo ablaze with the hotel being one of the arsonists’ primary targets: “With the opening in Cairo of Shepheard’s Hotel in 1841, […] the hotel started its diffusion into the East in parallel to imperialist advance (a linkage that proved eventually fatal to the Shepheard’s, burnt to the grounds in the 1952 riots that precipitated the end of British rule)” (Peleggi 125). The aforementioned riots were triggered by the killing of Egyptian auxiliary policemen on the west bank of the Suez Canal. The massacre by the British occupation troops fueled anti-British protests with crowds burning and ransacking large sectors of Cairo including the semantically-laden edifice of the colonial hotel. The Cairo Shepheard’s was ironically also damaged by fire in 1868. A London Illustrated News illustration of the hotel on fire and Cairo crowds in disarray presents readers with what possibly constitutes the first attempt at burning the Cairo Shepheard’s down. The photo-textual rendition of the event seems to suggest that the fire must have been a deliberate act. Thus, in 1952, things come full circle and the British colonial rule in Egypt ironically ends with its most powerful symbolic extension in smouldering ruins. Thus, having become a symbolic extension of colonial power, the Shepheard’s opens in 1852 to be burned down in 1868 and subsequently reopens only to be completely burned down in the 1952 riots. Tijana Parezanović addresses the rich semantic load of the colonial hotel maintaining that “this particular type of hotel is theorized as a fictional means of questioning the sustainability of the imperial project of colonialism” (2016: 53). The burning of the hotel premises is symptomatic of the disintegration and decline of colonial Cairo and, ultimately, the British Empire itself, against the backdrop of a city progressively transformed into a largely monocultural and monolingual capital palpitating with the expectation of a new post-colonial republic ahead.

As per Parezanović’s discussion of colonial hotels, their irrevocable decay discloses “a truer state of the already crumbling Empire” and the inherent ugliness of any colonial venture for that matter (62). Constructed as mirror-image of the imperial centre, the Cairo Shepheard’s provides a cultural and spatial framework that unwittingly registers the gradual historical downfall of the British Empire itself. With its ephemeral grandeur forever vanishing, the hotel is finally smouldering in the flames, reduced to ashes; a turn of events largely unimaginable at the time Trollope and Edwards glorify Cairo via the complacency and ostentation of the Shepheard’s marking the onset of the British colonial enterprise in Egypt.

Herzfeld, Michael. “The Absent Presence: Discourses of Crypto-Colonialism,” The

Ibrahim, Tarek. Shepheard’s of Cairo: The Birth of the Oriental Grand Hotel.

Parezanović, Tijana. “Other Spaces of the Empire: A Colonial Hotel in J. G. Farrell’s

Trollope, Anthony. “An Unprotected Female At the Pyramids,” Tales of All 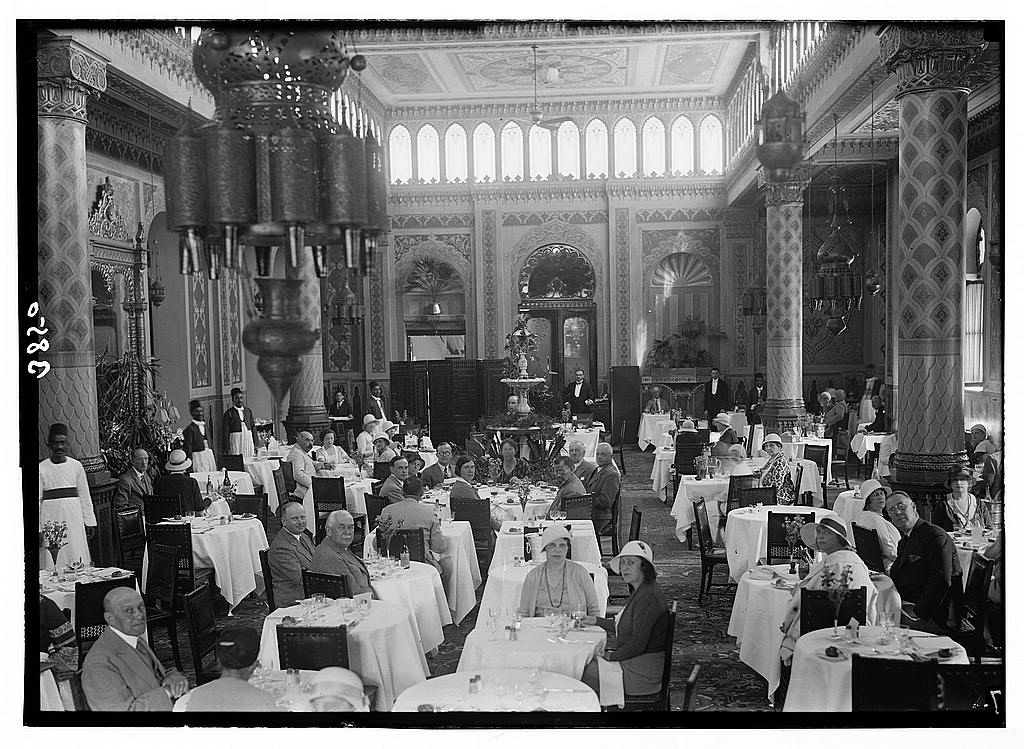 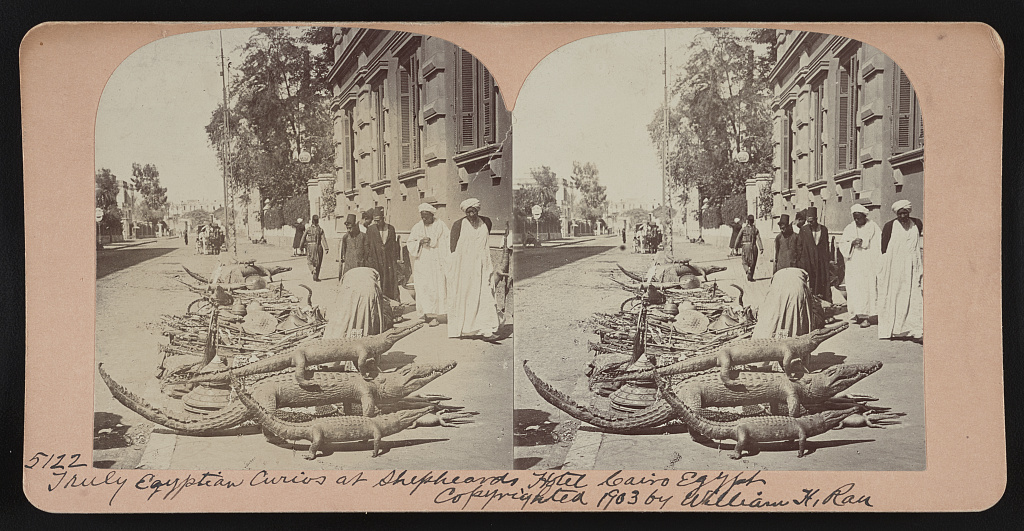 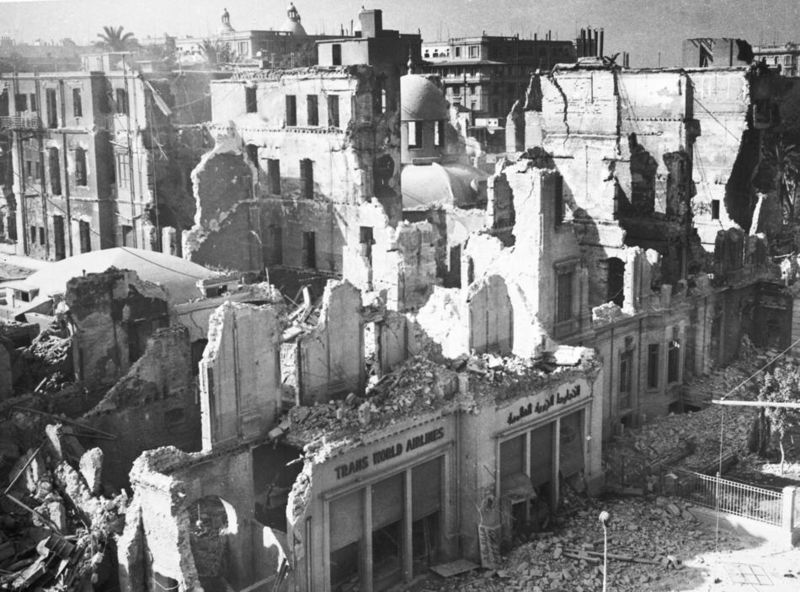