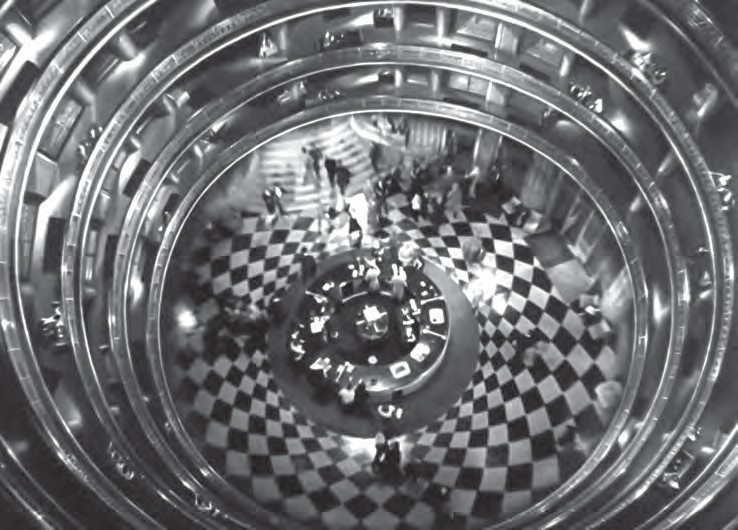 Edmund Goulding’s Grand Hotel (1932) is a key hotel film for the way in which it deftly treats back and front-of-house while incorporating class divisions among guests. Adapted from Vicki Baum’s novel, the film puts into cinematic practice the symbolic and narrative possibilities offered by the hotel. Grand Hotel codifies visually the fantasies associated with hotel space as it both draws on and inspires the characters’ ways of imagining hotel occupancy; acting out the fantasy of frequenting the Grand Hotel is central to the film’s plot.

While the revolving door emerges as Grand Hotel’s iconic image, intriguingly, the picture begins with another shot that will also recur: a dynamic overhead pan of operators connecting people in the hotel’s telephone exchange (figure 1). The switchboard acts as a visual reminder of the technology that links and permeates the modern hotel, as well as a clever device to introduce and underline the myriad plotlines unfolding in the space. This latter aspect is mirrored by a subsequent overhead shot of the busy lobby that further accentuates the ways in which the trajectories of guests and staff intersect while visually referencing the emblematic revolving door (figure 2). The attention given to characters of different classes contributes to a more nuanced understanding of how occupancy and the hotel are portrayed onscreen. From the anxious porter, the diva’s assistant, and the dying Kringenlein to the Baron and the desperate industrialist Preysing, essential plot points are laid out thanks to the communication technology provided by the hotel. The camera treats all of them equally, even as their specific relationships to the space differ. The opening plot exposition concludes with a series of short cuts between the characters and then a final transition to the one hotel occupant who seemingly abides outside contemporary time: the war-scarred Dr Otternschlag. It is he who, while calmly smoking in the lobby among the hubbub, proclaims: “Grand Hotel: people come, people go, nothing ever happens.” The adage matches the spinning of the door and bookends the film, thus casting the various narratives as mere snapshots of a series of different, interlocked hotel experiences.

The Doctor’s role as a chorus figure is important for the insights he provides regarding hotel life. Aside from his famous line, one conversation featuring Kringenlein is particularly apropos. The terminally-ill man serves as a lynchpin between classes and morphs the standard rags-to-riches tale. While one great dose of the good life at the Grand Hotel will surely expend the sum total of his savings, now relieved of pecuniary worries, he may well run out of life first. The scene takes place in the hotel’s busy American bar as a medium dolly shot from the servers’ point of view comes to frame the two men. While Kringenlein, who had marveled earlier at having his own private bathroom, continues to be wide-eyed about the space and its practices, the Doctor, a tad drunk, muses on the existential architecture of the grand hotel in general:

And what do you do in the Grand Hotel? Eat. Sleep. Loaf around. Flirt a little, dance a little. A hundred doors leading to one hall. No one knows anything about the person next to them. And when you leave, someone occupies your room, lies in your bed … that’s the end.

This insightful commentary made by the resident observer sums up the generic experience of the hotel guest, who has the luxury of travel by choice. His words touch on fundamental elements such as: the evasion of domestic duty, the inherent sexual possibilities and other ludic amusements in a hotel, as well as the anonymity afforded by a stay. At the same time, the Doctor, a holdover from another age, underlines the temporary notion of occupancy and the impossibility of actually owning the space; his own temporal distance gives him clarity and perspective about the hotel and its effects.

Part of the importance and appeal of Grand Hotel as a hotel film, though, is that it does not hew to a single interpretation but rather explores occupancy at different levels through its characters. While the Doctor’s observations may be true for a segment of society, the presence of Kringenlein as the interlocutor here generates productive tension. Both his general unfamiliarity with the codes of elite travel and specific behaviour in exclusive spaces convert him into a surrogate for the middle-class viewer who imagines themself in his place. Otternschlag’s comments also obscure the experiences of the staff, who are extremely present in the film. This diversity of perspectives and imagery, both narrative and visual, is what makes Grand Hotel such a pivotal hotel film and an important example of forms of occupancy onscreen.

Adapted from The Hotel: Occupied Space (University of Toronto Press, 2018)

Bob Davidson is Professor of Spanish & Catalan Studies and Associate Faculty of the Culinaria Research Centre at the University of Toronto, where he also serves as Director of Victoria College’s Northrop Frye Centre. The author of Jazz Age Barcelona (U of Toronto Press, 2009; shortlisted for the Canada Prize in the Humanities) and The Hotel: Occupied Space (U of Toronto Press, 2018), he is currently researching a new project entitled The Scent of Spain: Fragrance, Odour and Culture. In 2022, Professor Davidson was awarded the XXXIV Premi Josep M. Batista i Roca – Memorial Enric Garriga Trullols for the promotion of Catalan culture abroad. He takes his martini with a little extra vermouth and an olive. 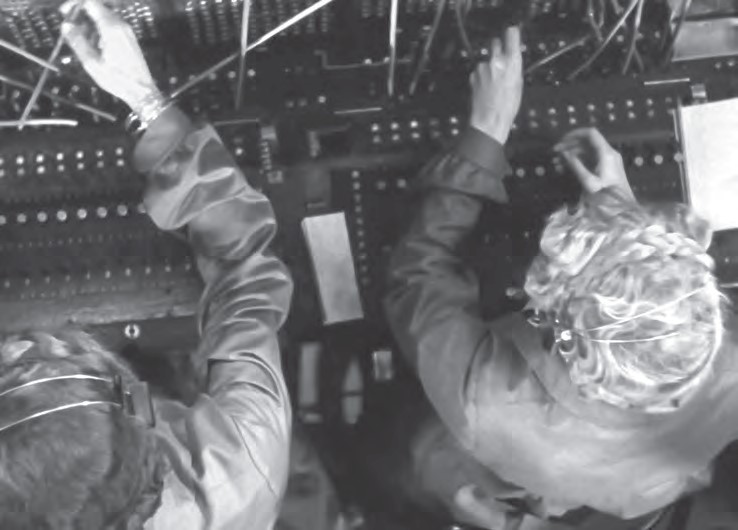