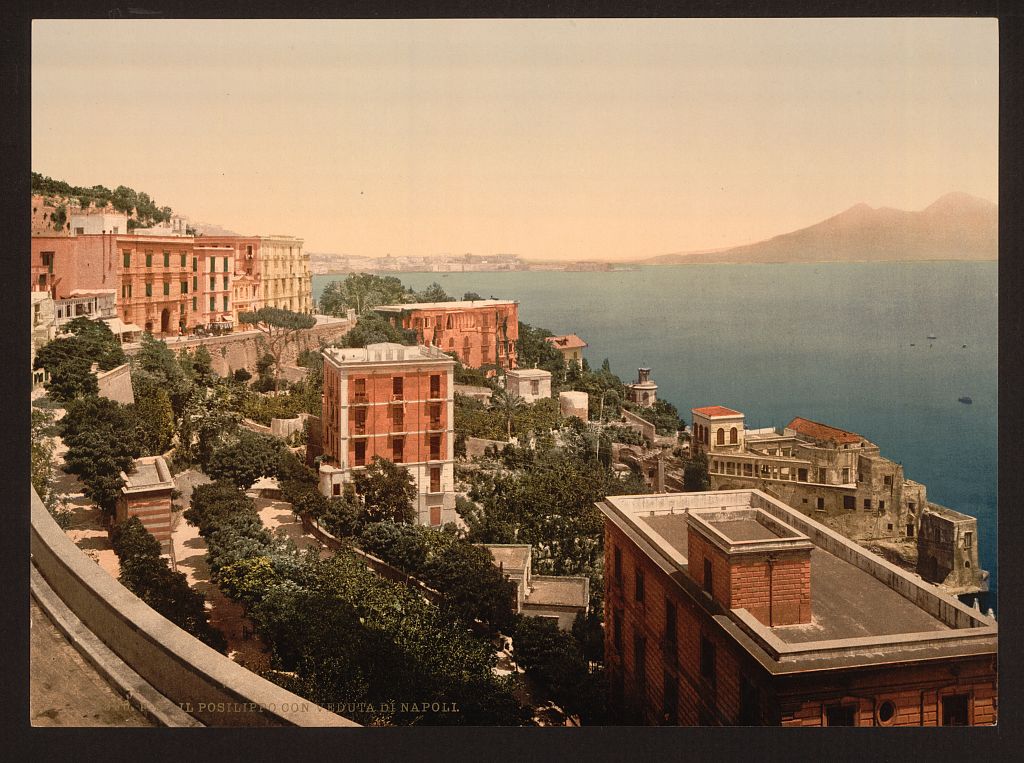 George Gissing’s The Emancipated, published in 1890, uses the author’s own experience from his first and long-awaited journey to Italy.  The novel presents a group of English people visiting Italy and marks a transition from Gissing’s fiction about the underclasses of labourers and destitute people in the 1880s to novels exploring the Victorian middle classes. The author’s beloved Italian scenes are the setting for conflicts, intrigues, and passions, as well as for emancipation, which entails a revolt against Victorian Philistinism, hypocrisy, and domesticity. The hotels represented in the novel embody the stratification of Victorian society following travellers aboard; they also evoke the social and moral themes preoccupying Gissing in the 1890s, hosting a range of  middle-class characters, including artists, tradesmen and “new women.”

The novel opens with an English traveller writing a letter in her room at Naples:

By a window looking from Posillipo upon the Bay of Naples sat an English lady, engaged in letter-writing.” She was only in her four-and-twentieth year, but her attire of subdued mourning indicated widowhood already at the stage when it is permitted to make quiet suggestion of freedom rather than distressful reference to loss; the dress, However, it was severely plain, and its grey coldness, which would well have harmonized with an English sky in this month of November, looked alien in the southern sunlight. There was no mistaking her nationality; the absorption, the troubled earnestness with which she bent over her writing, were peculiar to a cast of features such as can be found only in our familiar island; a physiognomy not quite pure in outline, vigorous in general effect and in detail delicate; a proud young face, full of character and capacity, beautiful in chaste control.[…]

The furniture of her room was modern, and of the kind demanded by wealthy forestieri in the lodgings they condescend to occupy. On the variegated tiles of the floor were strewn rugs and carpets; the drapery was bright, without much reference to taste in the ordering of hues; a handsome stove served at present to support leafy plants, a row of which also stood on the balcony before the window. Round the ceiling ran a painted border of foliage and flowers. The chief ornament of the walls was a large and indifferent copy of Raphael’s “St. Cecilia;” there were, too, several gouache drawings of local scenery: a fiery night-view of Vesuvius, a panorama of the Bay, and a very blue Blue Grotto. The whole was blithe, sunny, Neapolitan; sufficiently unlike a sitting-room in Redheck House, Bartles, Lancashire, which Mrs. Baske had in her mind as she wrote. […]

“It will soon be six months since I lived my real life there; during my illness I might as well have been absent, then came those weeks in the Isle of Wight, and now this exile. I feel it as exile, bitterly. To be sure Naples is beautiful, but it does not interest me. You need not envy me the bright sky, for it gives me no pleasure. There is so much to pain and sadden; so much that makes me angry. On Sunday I was miserable.”

While the establishment where Miriam Baske lodges caters to affluent British visitors, The Emancipated includes at least three types of lodgings for Britons in Italy, separating the upper-middle from the middle-class visitors and the tourists from the artists. Many of the novel’s characters stay at the pension Gluck, recommended by the Baedeker, as Gissing points out in the description of this boarding-house at the beginning of the third chapter:

The year was 1878. A tourist searching his Baedeker for a genteel but not oppressively aristocratic pension in the open parts of Naples would have found himself directed by an asterisk to the establishment kept by Mrs. Gluck on the Mergellina; — frequented by English and Germans, and very comfortable. The recommendation was a just one. Mrs. Gluck enjoyed the advantage of having lived as many years in England as she had in Germany; her predilections leaned, if anything, to the English side, and the arrival of a “nice” English family always put her in excellent spirits. She then exhibited herself as an Anglicized matron, perfectly familiar with all the requirements, great and little, of her guests, and, when minutiæ were once settled, capable of meeting ladies and gentlemen on terms of equality in her drawing-room or at her table, where she always presided. Indeed, there was much true refinement in Mrs. Gluck. You had not been long in her house before she found an opportunity of letting you know that she prided herself on connection with the family of the great musician, and under her roof there was generally some one who played or sang well. It was her desire that all who sat at her dinner-table — the English people, at all events — should be in evening dress. She herself had no little art in adorning herself so as to appear, what she was, a lady, and yet not to conflict with the ladies whose presence honoured her.

Yet, the Philistinism and propriety of the Victorian tourists who frequent the pension Gluck and often share condescending or pedantic views on Italy are juxtaposed to the camaraderie and fun shared by the artists staying at Albergo del Sole in Pompei or even to the simplicity of the rooms with a view rented by the painter Ross Mallard at a tenement high-up in a working-class neighbourhood of Naples.

A walk of ten minutes, and there shone light from windows. The lad ran forward and turned in at the gate of a garden; Mallard followed, and approached some persons who were standing at an open door. He speedily made arrangements for his night’s lodging, saw his room, and went to the quarter of the inn where dinner was already in progress. This was a building to itself, at one side of the garden. Through the doorway he stepped immediately into a low-roofed hall, where a number of persons sat at table. Pillars supported the ceiling in the middle, and the walls were in several places painted with heads or landscapes, the work of artists who had made their abode here; one or two cases with glass doors showed relics of Pompeii. […]

That was a great evening round the table at the Albergo del Sole. How gloriously the air thickened with tobacco-smoke! What removal of empty bottles and replacing them with full! The Germans were making it a set Kneipe; the Englishmen, unable to drink quite so heroically, were scarce behind in vehemence of debate.

From The Emancipated: A Novel, London: Bentley, 1890 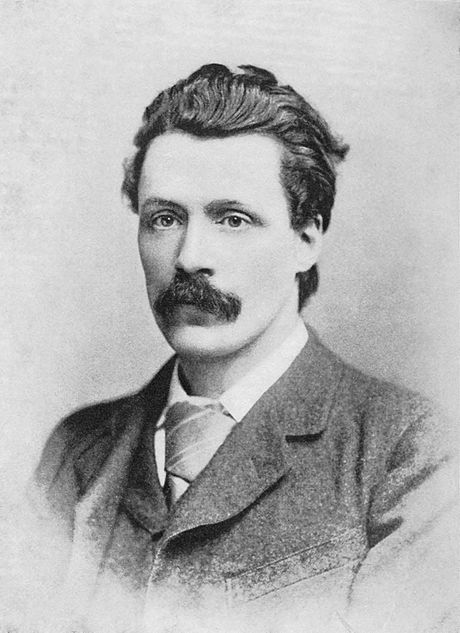