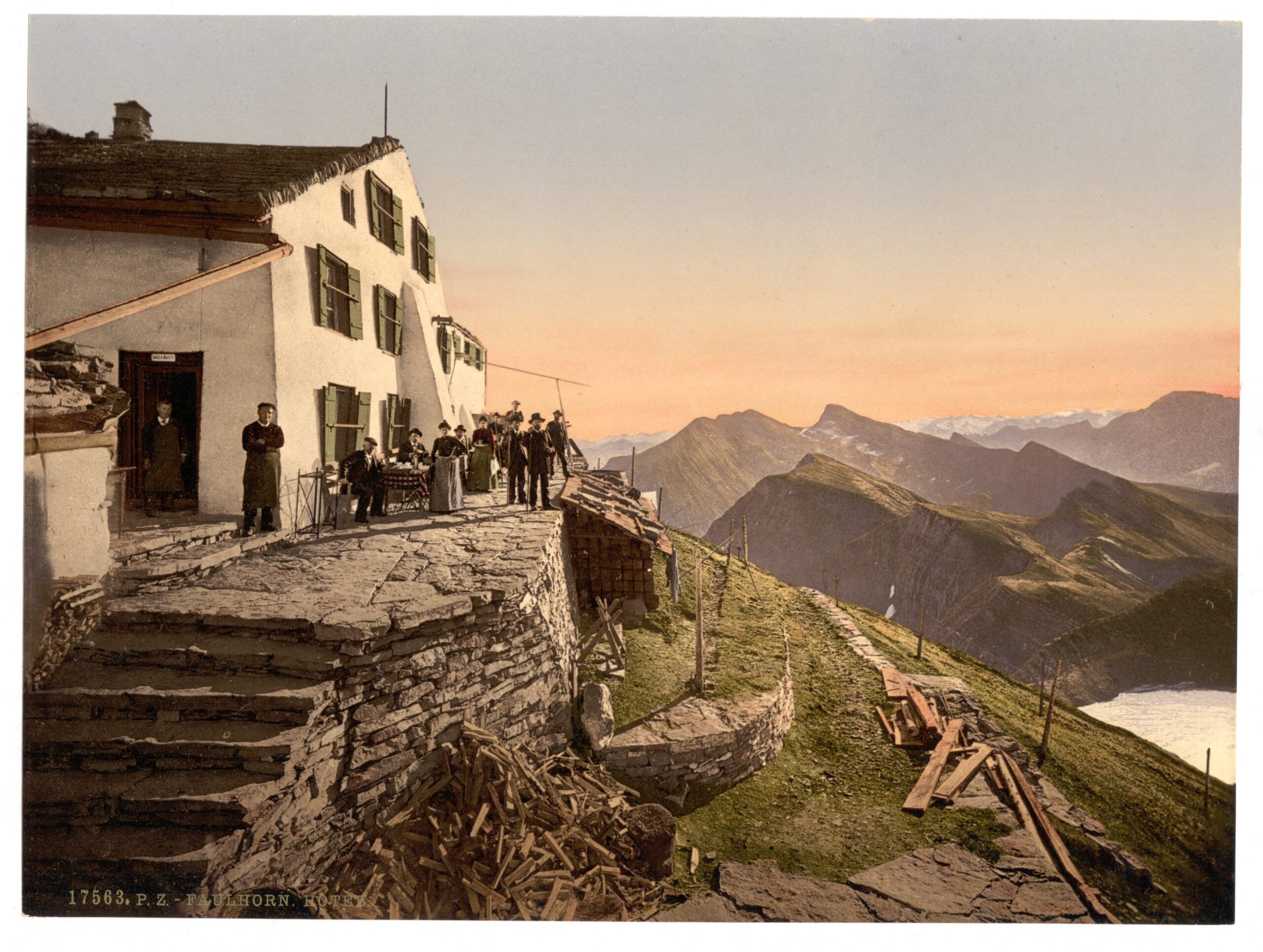 When the door was at last blessedly closed upon the narrow room whose first statements miscarried, lost in the discovery that even up here there was no change in the baked dry air, she made for the cool light of the end window but found an increase of the oppressive warmth. […]

Cold was banished, by day and by night.    For a fortnight, taken from the rawest depths of the London winter, there would be no waste of life in mere endurance.

[…] Light and warmth in profusion—in a cheap room in a modest hotel.

Switching on the light that concentrated on the table and its loaded little tray and transformed the room to a sitting-room, ‘I ’m in Switzerland,’ she said aloud to the flowered earthen-ware and bright nickel, and sat down to revel in freedom and renewal and at once got up again realising that hurry had gone from her days, and flung off her blouse and found hot water set waiting on the washstand and was presently at the table in négligé and again ecstatically telling it her news.

The familiar sound of tea pouring into a cup heightened the surrounding strangeness.    In the stillness of the room it was like a voice announcing her installation, and immediately from downstairs there came as if in answer the sound of a piano, crisply and gently touched, seeming not so much to break the stillness as to reveal what lay within it.

She set down her teapot and listened, and for a moment could have believed that the theme was playing itself only in her mind, that it had come back to her because once again she was within the strange happiness of being abroad. (Oberland 33-35)

In her 2019 Mobility and the Hotel in Modern Literature, Emma Short reads the scene for its “pronounced sense of freedom within the hotel bedroom”, noting how the protagonist Miriam Henderson moves from the domestic confinement of the previous novel, The Trap (1925), to the “dawning realisation of [the hotel room’s] liberatory potential” (156-157). Oberland begins with Miriam’s indispensable train ride and her subsequent arrival at the Hotel Alpenstock in the Bernese Oberland. As is often the case in Richardson’s Pilgrimage, Miriam exhibits a privileged relation to space. She absorbs her surroundings in a manner that conflates the sheer materiality of the built environment of the hotel premises with what goes on in her consciousness. At the same time, her reception of the hotel room space constitutes an example of how space in Pilgrimage may arouse ambivalent feelings, yet it is never neutral: the “baked dry air” and the “oppressive warmth” of Miriam’s first impressions give way to the very welcome fortnight break from the “rawest depths of the London winter” marking the geographical trajectory from the heart of London to the Swiss Alps.  As Short argues, “the hotel bedroom offers a type of privacy unavailable elsewhere, and thereby provides a level of support for the female subject that is both crucial and unparalleled in the spaces of the late nineteenth and early twentieth centuries” (159).