Mark Twain, “America’s premier traveling spokesperson,” boarded the Quaker City in 1967 to enjoy “the Quaker City Pleasure Excursion, a highly publicized planned five-month tour to the Old World” (Melton 91, 94). The outcome of this peregrination was his 1869 travelogue entitled The Innocents Abroad or the New Pilgrims’ Progress, largely based on his letters to newspapers about the voyage he made to Europe, Egypt, and the Holy Land. In his laconic Preface, Twain introduces his writing as “a record of a pleasure-trip” (5). The first paragraph of chapter XI attests to what Jeffrey Malton describes as the author’s “unapologetic American confidence” (94):

We are getting foreignized rapidly and with facility. We are getting reconciled to halls and bedchambers with unhomelike stone floors and no carpets—floors that ring to the tread of one’s heels with a sharpness that is death to sentimental musing. We are getting used to tidy, noiseless waiters, who glide hither and thither, and hover about your back and your elbows like butterflies, quick to comprehend orders, quick to fill them; thankful for a gratuity without regard to the amount; and always polite—never otherwise than polite. That is the strangest curiosity yet—a really polite hotel waiter who isn’t an idiot. We are getting used to driving right into the central court of the hotel, in the midst of a fragrant circle of vines and flowers, and in the midst also of parties of gentlemen sitting quietly reading the paper and smoking. We are getting used to ice frozen by artificial process in ordinary bottles—the only kind of ice they have here. We are getting used to all these things, but we are, not getting used to carrying our own soap. We are sufficiently civilized to carry our own combs and toothbrushes, but this thing of having to ring for soap every time we wash is new to us and not pleasant at all. We think of it just after we get our heads and faces thoroughly wet or just when we think we have been in the bathtub long enough, and then, of course, an annoying delay follows. These Marseillaises make Marseillaise hymns and Marseilles vests and Marseilles soap for all the world, but they never sing their hymns or wear their vests or wash with their soap themselves. (Twain 98)

Twain’s satirical representation of French hotel life revolves around an array of novel experiences that the random American traveller would encounter in the Old World that range from the absence of carpeting to the peculiar sort of ice available in hotels. Yet his focus on the limited availability of soap in a European city that has become a household name thanks to its soap production carries more weight. As Anne McClintock argues in her wonderfully insightful Imperial Leather, in the Victorian era, soap was part and parcel of the imperial “civilising” mission alluding to purity, cleanliness, and superiority and invested with “magical fetish powers” (207). Twain’s comments on the difficulty of accessing soap in the Marseilles hotel are aptly preceded by a pertinent reference to combs and toothbrushes, establishing a context of hygiene and cleaning rituals that seem to characterise the Americans. In this sense, the soap (not lavishly) offered in the hotel falls short of his expectations, while the imagined promise of the famous Marseilles commodity is debunked linking the city to the idea of deficient cleanliness. The repetition of the plural pronoun “we” throughout the passage further accentuates the “us and them” binary that Twain builds in his impression of the unnamed hotel and in the final couple of lines the Marseilles soap is put on a par with the Marseillaise, the national anthem of France in a gesture that makes the city a synecdoche of the entire country. 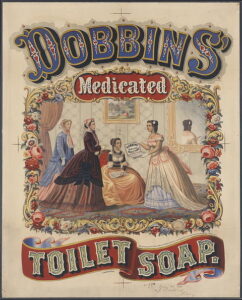