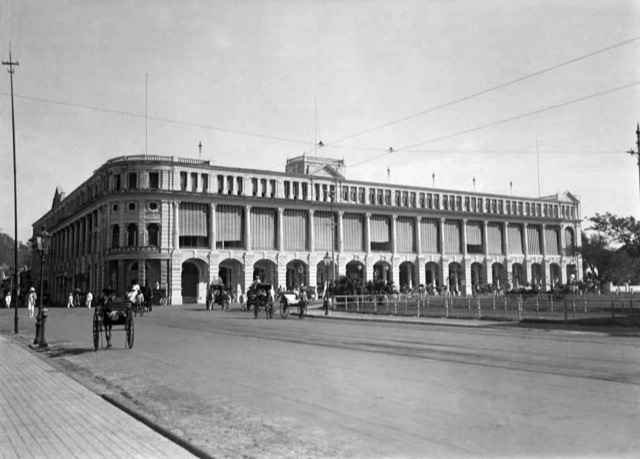 Lord Jim, Joseph Conrad’s fourth novel is the story of an agent serving at an East Indian trading post, burdened by guilt over the sinking of the Patna, sailing across the Indian Ocean to the Red Sea, and his cowardice in the critical moments of peril. Marlow, the narrator, appears to be haunted by Jim’s inner conflict and tells his story through sympathetic eyes following the events that determine Jim’s fate. In the opening of Lord Jim’s chapter seven, on the veranda of the Malabar House Hotel, Jim is about to begin his storytelling to Marlow, while Marlow incisively describes the mail-boat passengers that fill the dining-room:

An outward-bound mail-boat had come in that afternoon, and the big dining-room of the hotel was more than half full of people with a hundred pounds round-the-world tickets in their pockets. There were married couples looking domesticated and bored with each other in the midst of their travels; there were small parties and large parties, and lone individuals dining solemnly or feasting boisterously, but all thinking, conversing, joking, or scowling as was their wont at home; and just as intelligently receptive of new impressions as their trunks upstairs. Henceforth they would be labelled as having passed through this and that place, and so would be their luggage. They would cherish this distinction of their persons, and preserve the gummed tickets on their portmanteaus as documentary evidence, as the only permanent trace of their improving enterprise. The dark-faced servants tripped without noise over the vast and polished floor; now and then a girl’s laugh would be heard, as innocent and empty as her mind, or, in a sudden hush of crockery, a few words in an affected drawl from some wit embroidering for the benefit of a grinning tableful the last funny story of shipboard scandal. Two nomadic old maids, dressed up to kill, worked acrimoniously through the bill of fare, whispering to each other with faded lips, wooden-faced and bizarre, like two sumptuous scarecrows (63).

The narrator comes across as dismissive of the weary, vacuous travellers who think of the hotel labels as signs of distinction to be cherished and displayed. The colonial setting remains in the background as the labour force that keeps the hotel going consists of “dark-faced,” quiet servants, while the humorous depiction of the over-dressed, old servants adds to the theatricality and fakeness enveloping the hotel premies. Conrad’s fictional Malabar House Hotel has been identified by Norman Sherry as Singapore’s Hôtel de l’Europe (Donovan 84) and the unflattering sketch of its atmosphere may be read as typical of Conrad’s treatment of hotels, which, according to Stephen Donovan, reveals “a scepticism that verges on scorn” (Donovan 77). In his 2005 Joseph Conrad and Popular Culture, Donovan cites Under Western Eyes (1911), Victory (1915), and “A Friendly Place” (1912, 1921), among other works, to discuss how Conrad’s fiction seems to prioritize friendliness and a sense of the communal which is lacking from modern hotels, while “his own taste in hotels, which included the Savoy in Cannes […] tended towards the opulent” (77). As a matter of fact, Conrad was very familiar with Capri, which by 1900s was “virtually a German tourist colony” (Donovan 69). In contrast to the grandiose hotels of the area, the Conrads’ “tiny holiday home, the Villa di Maria” was very frugal; the Villa “lay in a narrow alley just below the magnificent Hotel Quisisana,” and Conrad also “referred to another sumptuous hostelry, the Hôtel Capri, as ‘a place where one can hang out well enough for a small ransom’” (Donovan 69).

Exterior view of Grand Hotel de l’Europe, Singapore. Located along the Esplanade, this hotel for the rich was started in 1857, closed in October 1932, and demolished in 1934. The old Supreme Court building now stands where the hotel once was.
Source: Wiki Media Commons