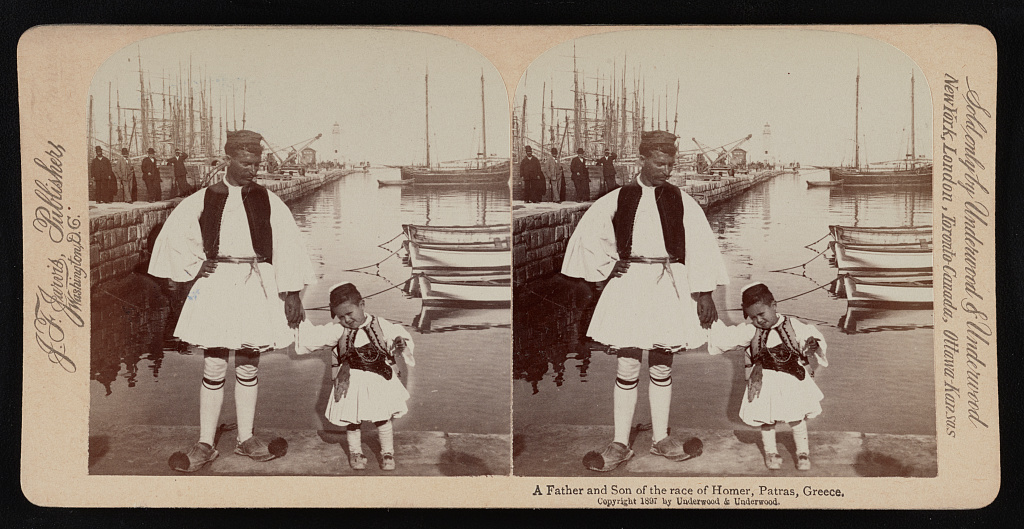 Henry Miller’s 1941 The Colossus of Maroussi, an impressionist travelogue that has become a classic in travel literature, features some scant hotel scenes that, much like the travelogue itself, seem to oscillate between fetishizing or idealization and utter disillusionment with the state of affairs in Greece at the onset of World War II. Ranging from hyperbole to contempt, these indicative hotel scenes underscore Miller’s imaginative construction of Greece via the lens of hospitality. Indeed, by consistently calling attention to the sad hospitality offered in Greek hotels, Miller’s Greek visions also seem, at times, to be a product of western, exceptionalist, and essentialist hermeneutic schemata. Lawrence Durrell’s vicious fight with his wife at the terrace of the Patras Cecil stands out in that it (ironically) summons the heroic impulse entrenched in the very legacy of Philhellenism in the post–Byronic era, “A New Kind of Byronism” as per David Roessel’s formulation (252–84). These sheltered  hotel rooftop heroics and antics, across the vistas of the gulf of Patras foregrounding the sharply ironic proximity of Missolonghi in the horizon, find culmination in Miller’s effort “on the terrace of the Hotel Cecil” to dissuade “Lawrence Durrell from enlisting in the Greek army” (Roessel 3).

The hotel porters at the Athens “Grand,” for example, are simultaneously portrayed as exoticized orientals (Wills 81–107) and “sad relics of a glorious past” immured in the “stupidity of today” (Herzfeld 917). On top of that, Miller’s harsh depiction of the unnamed Nauplia hotel lobby borders (epic) ridiculousness. While praising the amenities of the Patras Cecil, Miller vividly conveys the schizophrenic effect of the hotel lobby décor in Nauplia and boasts about the exceptional currency exchange rate that affords him unprecedented amenities and comforts while inhabiting the cockroach-infested rooms of the Athens “Grand” (probably the now demolished and then old, dilapidated Grand Hôtel d’ Angleterre in Constitution Square, 1875-1961). 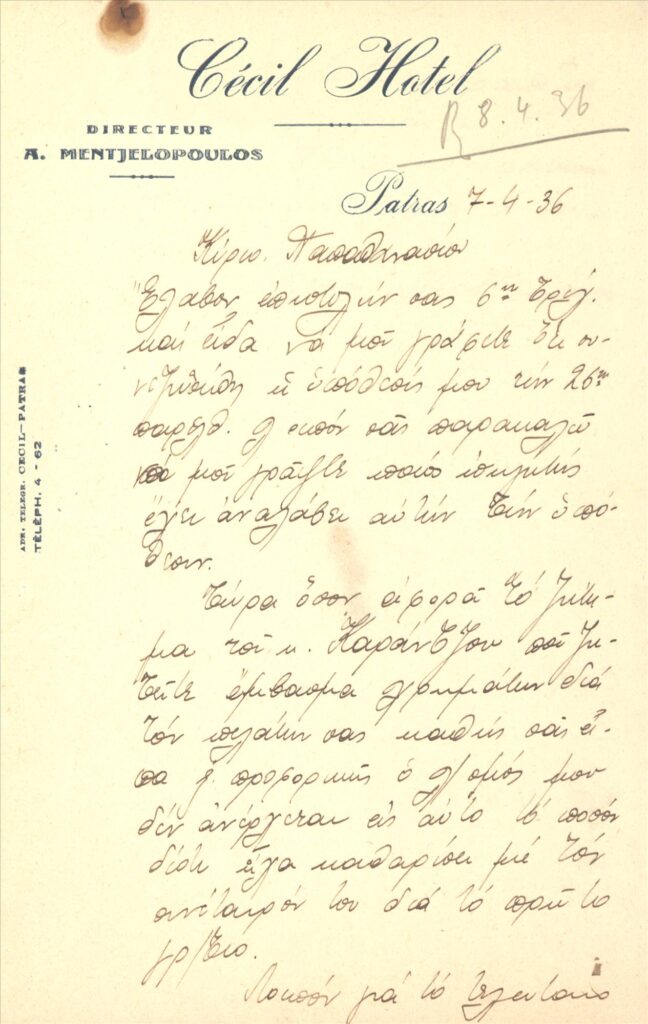 Underwood & Underwood, Publisher. A Father and Son of the race of Homer, Patras,
Greece. Greece, 1897. Photograph. Retrieved from the Library of Congress, https://www.loc.gov/item/2020680975/. 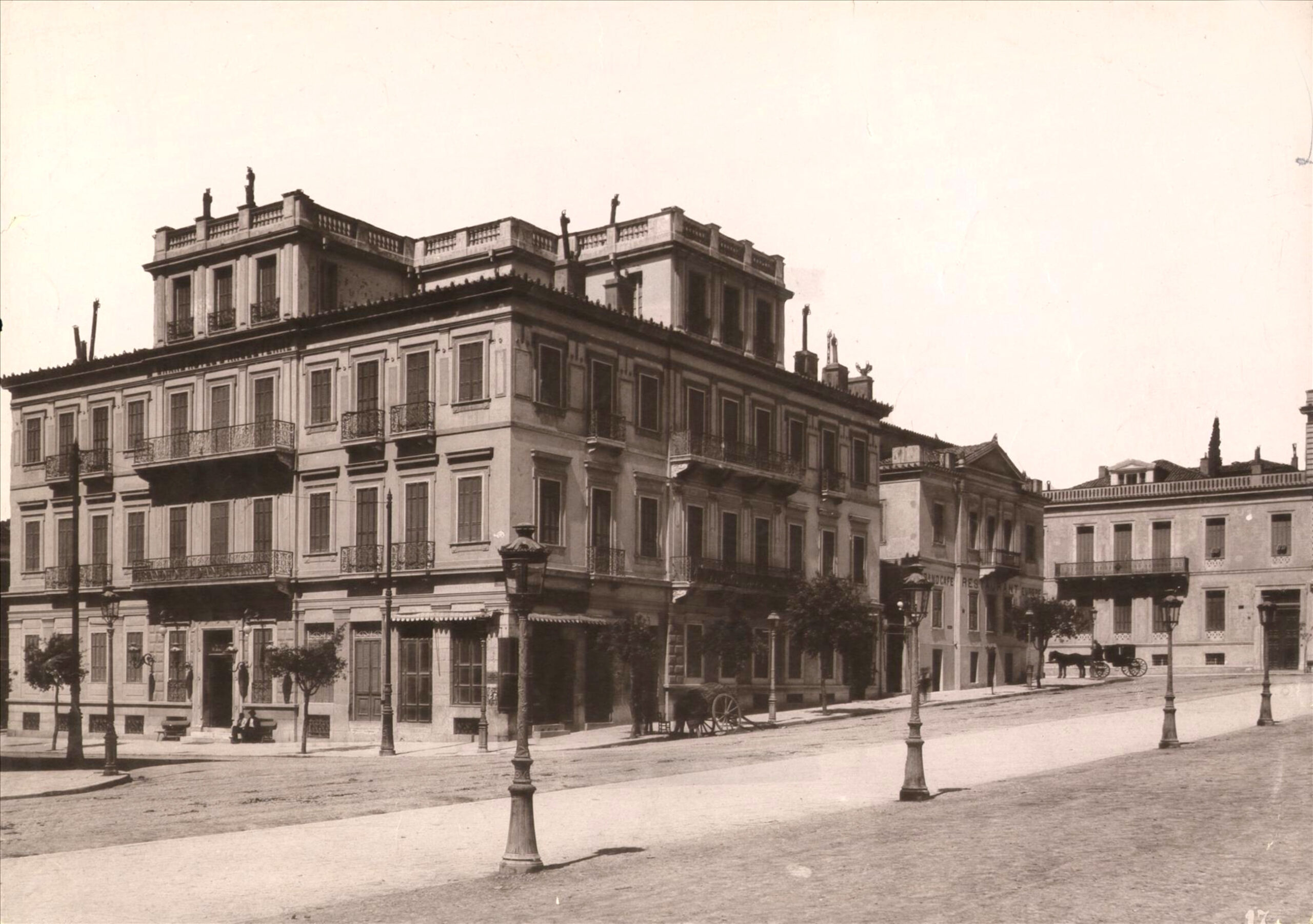 At Patras we decided to go ashore and take the train to Athens. The hotel Cecil, which we stopped at, is the best hotel I’ve ever been in, and I’ve been in a good many. It cost about 23 cents a day for a room the likes of which could not be duplicated in America for less than five dollars. I hope everybody who is passing through Greece will stop off at the Hotel Cecil and see for themselves. It is an event in one’s life… We breakfasted towards noon on the terrace of the solarium overlooking the sea. Here a terrible wrangle ensued between Durrell and his wife. I felt quite helpless and could only pity them both from the depths of my heart. It was really a private quarrel in which the war was used as a camouflage. The thought of war drives people frantic, makes them quite cuckoo, even when they are intelligent and far-seeing, as both Durrell and Nancy are. […] Now Durrell was talking the same way, the only difference being that he was not so crazy to be killed as to be with the Greek forces in Albania—because he thought more of the Greeks than he did of his own countrymen. […] It was a bad place in which to discuss a subject of this sort. The atmosphere was charged with memories of Byron. Sitting there, with Missolonghi so near, it was almost impossible to think sanely about war. (23-24)

The hotel was a bit of a madhouse. In the lobby there were engravings of famous Greek ruins and of Indians from the Amazon and the Orinoco. The dining room was plastered with letters from American and English tourists, all praising the comforts of the hotel in extravagant language. The silliest letters were signed by professors from our celebrated universities. Katsimbalis had two beds in his room and I had three. There was no heat because we were the only guests. (67).

At the same time I was informed indirectly that I might have an excellent room with private bath at one of the best hotels for what I was paying at the Grand. I preferred to stay at the Grand. I like the maids, the porters, the bellhops and the proprietor himself; I like hotels which are second or third rate, which are clean but shabby, which have seen better days, which have an aroma of the past. I liked the beetles and the huge water bugs which I always found in my room when I turned on the light. I liked the broad corridors and the toilets all jammed together like bath houses at the end of the hall. I liked the dismal courtyard and the sound of a male choir practicing in a hall nearby. For a few drachmas I could get the bellhop, who was an old Parisian of fourteen years of age, to deliver my letters by hand, a luxury never before enjoyed. (155-56)

Herzfeld, Michael. “The Absent Presence: Discourses of Crypto–Colonialism,” The

Roessel, David. In Byron’s Shadow: Modern Greece in the English and American